Mario Montez at MoMA at the Jack Smith retrospective 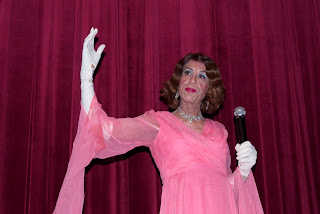 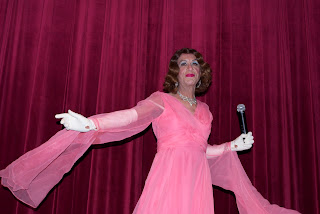 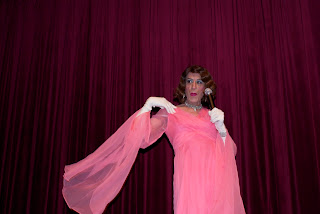 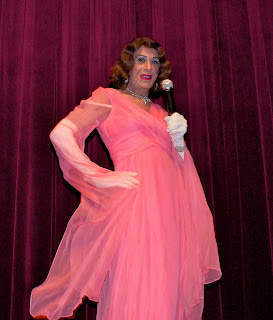 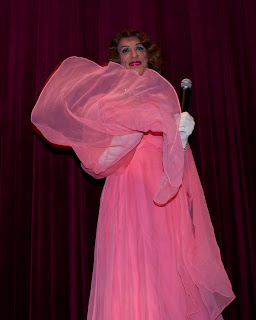 'TWAS THE MONTH BEFORE CHRISTMAS

One of my in-laws wrote a very funny poem satirizing the Republican presidential candidates.  I found it very funny and thought I should share it here.


'Twas the month before Christmas and who should appear
It was Drunken Rick Perry to give Christians cheer.
He prayed and he joked and then he got serious
"I'm all for the killing." The crowd went delirious.
Herman Cain came on next with his big booming voice.
"Where's all the white women? I'll give them their choice."
"I'll find them a job if they do as I say."
"Just give me a b-job and get out of my way."
Who could ever forget Bachman's shrill screech
"It is me. It is I and I'm going to preach."
"I know all the right things; I know what to do."
"For I'm the only American who's tried, tested and true."
I will remember Mit Romney as he strolled through the fray
"Just listen to me. I've come to save the day."
"I'll flip and I'll flop with such cunning and dare,
You won't even notice my Holy Underwear."
Ron Paul shook his head with disdain and disgust
"Just look at them all. There's not one you can Trust."
"We must destroy the whole system, go back to the start."
"Adhere to the original and our forefather's first fart."
Newt couldn't be there but he sent all his best.
His wife was in the hospital and he was hitting on guests.
She wasn't quite gone but he was thinking ahead
"Who next should I have in my home, in my bed?"
Then out on the lawn there occurred such a clatter
Ann Coulter was screaming "My new book! It's a Tattler."
"Death to all who doubt me or fall from my grace."
That brought a big smile to old Rick Perry's face.
Rush Linbaugh was reporting with his usual pout
But he got very lost when drugs began to run out.
John Bonher was there but had little to say.
Repeating "Yes that's my name but don't pronounce it that way."
Eric Cantor showed up but he only walked through
He heard it was for Christians but he was a Jew.
He went to the Tea Party. He thought it would be nicer.
Their motto: "Believe what we say or step into the slicer."
Only Christians were there like Condolica and George,
Dick Chenney, Don Rumsfeld, the Republican hoards.
When only the good people, you know who we mean,
the money people who support and are not seen.
They closed the doors and they started to sing
About all of the wonders of Christ their great King.
They brought forth the picture of the Christ they had known
It was Ronald Reagan with a crown on a thrown.
Posted by uziny at 4:40 AM No comments:

I got some lovely Japanese sweet potatoes at the Union Square Farmers Market yesterday and made them for dinner.  Since they turned out amazingly yummy and are so simple I thought I should share the recipe. 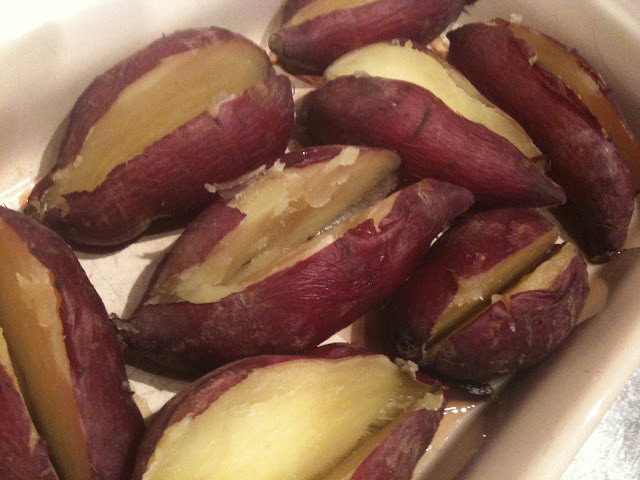 I used eight small Japanese sweet potatoes-their skin is more reddish but inside they are yellow.

1lb small Japanese sweet potatoes.  Wash and clean ends.  Make a slit in each potato along its length and going down about 1/2 to 3/4 of its depth.  Place in a 9X13 glass or ceramic baking dish and bake covered with foil for an hour at 350.  Remove from oven and pour or squirt some honey (to taste)  in the slits. I used about 2 or three ounces of a local farmers market honey then added a light sprinkling of kosher salt.  Recover with foil and return to the oven for another 25-30 minutes.  This will serve four.
Posted by uziny at 7:33 AM No comments:

I had to wait for the refrigerator repair man today and had a large cauliflower on hand so I decided to make some soup while waiting.  I used to make this using a chicken stock but because D.D.'s niece is a vegetarian and eats here occasionally, I have been experimenting with vegetarian cooking.
Ingredients:
One large cauliflower-cut into fairly small pieces, a large yellow onion-chopped, 1 quart of vegetarian stock, 1/2 cup of half and half, teaspoon of salt and 1/2 teaspoon of pepper, 1 ounce of soy sauce, few dabs of hot sauce, 5 or 6 tablespoons of olive oil.
Heat the oil and sweat onions in a soup pot, add salt and pepper.  Add the cut cauliflower and saute with the onions and oil till cauliflower softens, about ten minutes.  Add the soy and hot sauce and saute another 3-5 minutes.  Pour in the stock to cover cauliflower and cover pot with a lid.  Bring to a boil then reduce heat and simmer for 15-20 minutes.  Mash up cauliflower in the pot using a hand blender ( a potato masher will do as a substitute) until the texture is rough but no whole chunks remain.  Add the half and half, bring almost to a boil then reduce heat and let simmer for an hour or longer.  Add additional seasoning to taste. 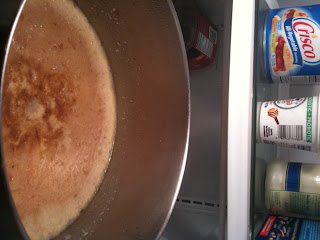 This is delicious served with some grated parmesan on top or a crustini with melted mozzarella.
Posted by uziny at 3:13 PM No comments: 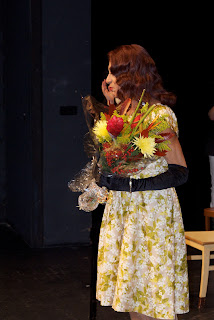 Uzi's Swampthing Spinach Pashtida
Pashtida is a crustless quiche.  I prepared this particular version for a Halloween eve dinner with the legendary Mario Montez who is in town to speak at MoMA's Jack Smith screening November 13 at 3pm.
It was a particular hit and I've been asked to share my recipe. 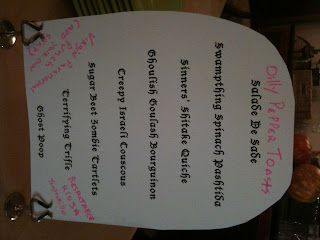 1lb ricotta, 1/2lb mozzarella cheese-grated, 1/4lb parmesan-grated, 4 eggs, 1lb frozen chopped spinach, 1 largish onion-chopped, 5-6 garlic cloves-chopped, dash of salt, pepper,  2tbs olive oil.  Heat oil in large skillet at med-high heat, soften onions, add garlic and then spinach, mix untill the spinach has soften and almost cooked through.  Let mixture cool.  Whip eggs in a large bowl, add salt and pepper than ricotta.  When it is an even color add the 2/3 of the mozzarella cheese and 2/3 of the parmesan to mixture, mix well and then add the cooled spinach and allium and mix well again.  Pour in a ceramic or glass 9x13 baking pan and sprinkle the remaining cheeses on top then bake in a preheated oven at 350 degrees for 35-40 minutes.  It is done when a fork plunged in the center comes out clean.  Pashtida is very flexible and all of the ingredients except the eggs can be modified to taste.  It can be served hot, at room temperature or straight out of the fridge and is yummy for at least 2-3 days after baking.
Posted by uziny at 7:28 AM No comments: